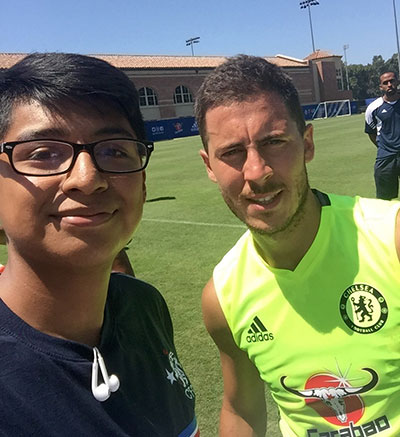 SANTA ANA, CA. – (Aug. 9, 2016) – When Yokohama Tire Corporation announced it was looking for “the ultimate Chelsea FC fan” in its Yokohama True Blue Fan Challenge contest, Daniel E. put on his Chelsea beanie and shirt and started working on the winning entry.

His creative, clever short video beat out hundreds of entries to win him and a guest the grand prize: a trip to see the match between the 2015 English Premier League champion and Liverpool FC at the Rose Bowl in Pasadena on July 27. Chelsea won the match 1-0. Daniel also won $1,000 in spending money, tickets, hotel, airfare and a 2016-2017 Chelsea FC jersey signed by the first team squad.

“It was a great time and a rare experience,” said Daniel, who lives in Phoenix, Arizona. “They even surprised me with an opportunity to attend the player training where I got to meet some of the players and it was a lot of fun. Thank you, Yokohama, for having the contest.”

“Daniel’s enthusiasm really did show us he’s a super true blue Chelsea fan,” said Alan Holtschneider, Yokohama director of marketing. “It was great to see so many fans enter and show us how passionate they are about the team. That’s what makes our partnership with Chelsea so rewarding.”

Yokohama Tire Corporation is the North American manufacturing and marketing arm of Tokyo, Japan-based The Yokohama Rubber Co., Ltd., a global manufacturing and sales company of premium tires since 1917. Servicing an extensive sales network throughout the U.S., Yokohama Tire Corporation is a leader in technology and innovation. The company’s complete product line includes tires for high-performance, light truck, passenger car, commercial truck and bus, and off-the-road mining and construction applications.

Yokohama is a strong supporter of the tire care and safety guidelines established by the Rubber Manufacturers Association and the National Highway Transportation and Safety Administration. Details can be found at the “Tire Care & Safety” section at www.yokohamatire.com/tires-101/basic-information.