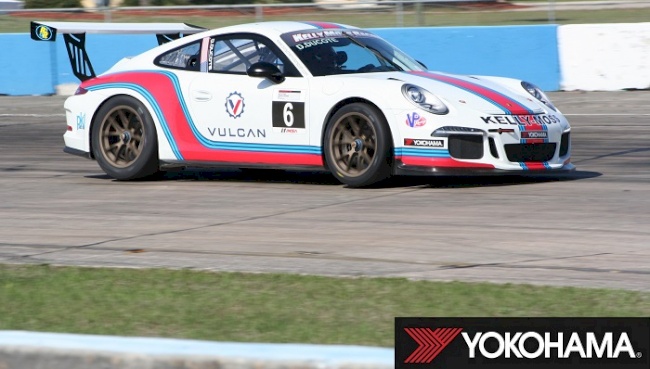 FULLERTON, CA (March 10, 2014) – Building upon its success in 2013 – which included capturing a championship in drifting and winning the Trophy Truck class at the HDRA South Point Vegas 250 race – Yokohama Tire Corporation (YTC) is gearing up for the 2014 motorsports season. “It’s a new year and we are fielding another strong racing lineup,” said Duane Sampson, YTC manager, motorsports. “In other news, we’re truly excited to be the exclusive tire supplier of the Red Bull Global Rallycross series. From off-road to sports cars to drifting, we are definitely ready to race.”

Yokohama will participate in five race series’ during 2014, including:

YTC has signed on to be the sole tire supplier in this 10-race series, which combines the best elements of circuit racing, off-road racing and rally competition. The series features heavily modified 600-horsepower production-based cars built for fast-paced heat races with huge jumps – some up to 70 feet. The tracks are a combination of dirt and asphalt with multiple obstacles and surface transitions. Top drivers in the series include Tanner Foust, Scott Speed, Bucky Lasek, Travis Pastrana and Nelson Piquet Jr. All competitors will race on specially-designed Yokohama ADVAN® race tires.

The series starts May 17-18 in Barbados and ends November 5 in Las Vegas. For details, visit www.global-rallycross.com.

The eight-venue, 16-round Porsche GT3 Cup Challenge USA by Yokohama features semi-pro drivers in two classes of matched Porsches. It’s the largest single-make series in North America and for the sixth consecutive season Yokohama will be the series’ sole tire supplier.

All Porsche GT3 Cup cars will compete on YTC’s orange oil-infused racing slick, the ADVAN® ENV-R2™, with more than 30 cars vying for championships in three GT3 divisions – Platinum, Gold and Masters (45 years and over) – at tracks throughout North America, including Sebring, Road Atlanta, Circuit of the Americas, Mazda Raceway at Laguna Seca and Watkins Glen.

The racing begins March 13-14 at Sebring. For details, visit http://www.imsa.com/series/gt3-challenge-usa/schedule

YTC returns to Formula Drift as the reigning champion, thanks to Michael Essa’s 2013 title-winning season. Essa powered his E46 BMW M3 with ADVAN Neova® AD08 R tires and will be sponsored once again by YTC. The seven-race series starts April 4-5 in Long Beach, California. For details, visit http://formulad.com/schedule/pro-championship/.

YTC is sponsoring the seven-race Lotus Cup USA series for the third consecutive year. The grassroots series, which offers Lotus owners the opportunity to compete at some of the top race circuits in U.S., is aimed at experienced racers as well as drivers competing for the first time. YTC’s A005® tire is the official tire of the series.

Yokohama is once again partnering with off-road racing’s power couple, Heidi and Cameron Steele. Heidi is a four-time SCORE Class champion and husband Cameron is a veteran Trophy Truck driver and two-time SCORE Person of the Year.

The Steeles and their Desert Assassins team will have specially engineered 40-inch GEOLANDAR A/T-S R® tires mounted on their 800-horsepower Trophy truck to help plow through some of the harshest terrain in the world at more than 120 mph. For 2014, the team will focus on the most iconic desert off-road races in North America, including the SCORE Baja 500 and SCORE Baja 1000, the Best in the Desert’s (BITD) Mint 400 and Vegas to Reno.

Yokohama Tire Corporation is the North American manufacturing and marketing arm of Tokyo, Japan-based The Yokohama Rubber Co., Ltd., a global manufacturing and sales company of premium tires since 1917. Servicing a network of more than 4,500 points of sale in the U.S., Yokohama Tire Corporation is a leader in technology and innovation. The company’s complete product line includes tires for high-performance, light truck, passenger car, commercial truck and bus, and off-the-road mining and construction applications. For more information on Yokohama’s extensive product line, visit www.yokohamatire.com.