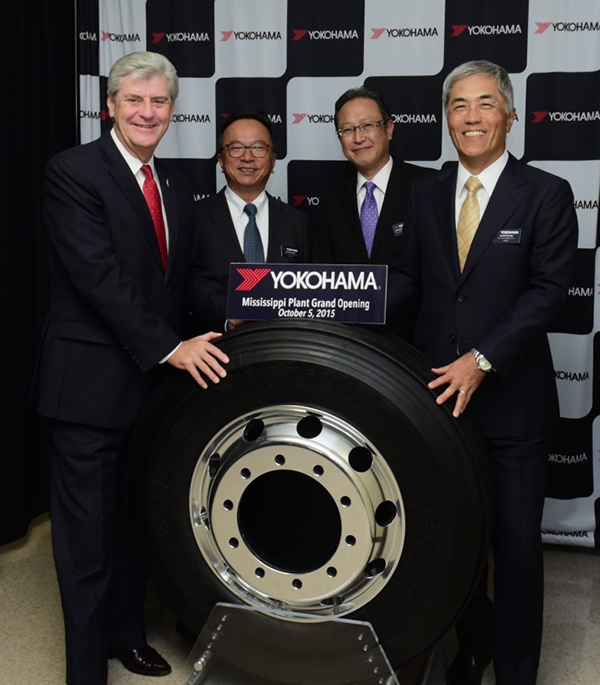 “The grand opening of our first U.S.-built plant is truly a historic day for Yokohama,” said Tadaharu Yamamoto, president of YTMM. “Thanks to Gov. Bryant, the great state of Mississippi, the entire community of West Point, the Golden Triangle Region and the incredible Mississippi workforce, the plant site was developed to a fully operational state-of-the-art facility in record time.”

As of now, YTMM has hired more than 260 employees and plans to eventually reach 500. Constructed on more than 500 acres of land, the YTMM plant houses manufacturing, warehousing and operations facilities, and will produce up to one million tires annually when running at full capacity.

Among the speakers at the festive ceremony were Hikomitsu Noji, president and representative director of The Yokohama Rubber Co., Ltd., (YTMM’s parent company in Tokyo, Japan) and Mississippi Gov. Phil Bryant.

“The opening of Yokohama’s manufacturing facility in West Point brings full circle a project that broke ground just two short years ago. I appreciate the Yokohama team, the Mississippi Legislature and state and local officials who have worked hard from day one to expedite this project and create so many jobs for the residents of West Point and the Golden Triangle region,” said Gov. Bryant. “I congratulate Yokohama on this milestone event, and the state of Mississippi looks forward to many more years of partnership with this great company.”