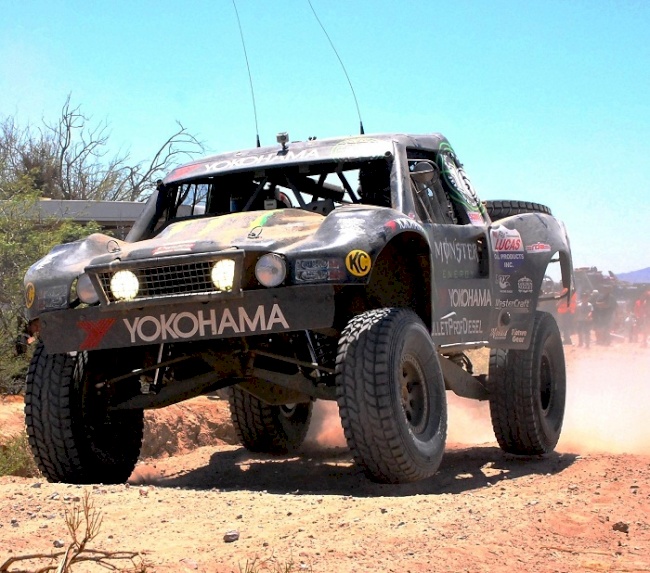 Competing on specially-engineered 40-inch Yokohama Geolandar A/T-S® R tires, the Desert Assassins will have two 800-horsepower Geiser Brothers Trophy Trucks tackling the rough terrain of San Felipe. It will be Steele vs. Steele as Heidi Steele goes against her husband Cameron. Heidi is racing for the first time in the Trophy Truck Class.

Heidi, a four-time SCORE (Southern California Off Road Enthusiasts) Class champion is sharing the driving duties with new Desert Assassins teammate Jessica McMillin. A member of the legendary off-road racing McMillin family, Jessica is also a SCORE champion herself, having won the Pro Truck Class in 2011.

“I’m really looking forward to racing in San Felipe,” said Heidi Steele. “Racing the Trophy Truck is like being a jet fighter pilot and the 40-inch Yokohama Geolandar tires are awesome! Jessica and I are going to make a great team because we’ve both had enough race experience to move up to the Trophy Truck class. Plus, I’m motivated by the fact that we are making history by being the first female Trophy Truck team.”

“Yokohama and the Desert Assassins are already off to a great start this season, thanks to Cameron’s win at HDRA’s (High Desert Racing Association) season opener in January,” said Duane Sampson, Yokohama’s motorsports manager. “With the team, trucks and Geolandar A/T-S R tires, we’ve got the momentum going into San Felipe to get more points toward the championship.”

The World Championship of Desert Racing is the brainchild of HDRA owner Roger Norman, who purchased SCORE over the summer. The two racing organizations are operating as separate companies and, as in the past, will have their own season class point champions. However, there will also be a combined points system to qualify for the World Championship title.